Today, people all around the UK are rapidly “cutting the cord” with their TV providers, choosing to switch to more flexible streaming tools to find entertainment instead. Streaming channels like Amazon Prime, NOW TV and Netflix ensure that you can access hundreds of hours of high-quality television and videos – often for an excellent price point.

Currently, streaming TV is responsible for sharing some of the most popular television shows in the world, including popular picks like The Boys on Amazon Prime and Orange Is the New Black on Netflix. Rebekah Carter, a contributor from Broadband Genie has provided us with a guide to some of the top shows and how to watch them.

Need a little inspiration on what you should be streaming?

Here are the programmes that everyone is talking about:

Ever since it first began on Netflix, Orange is the New Black has been one of the most popular streaming shows in history. Seven seasons after it launched in 2013, the show is finally ending this year, giving people an opportunity to learn all about what happens to Piper Chapman (Taylor Schilling) as she leaves the prison that changed her life and tries to make a difference on the outside.

Perhaps the most chilling rendition of the superhero genre we’ve seen for quite some time, The Boys shows you what the world could be like if Superheroes existed. Beloved by the public, yet managed by a shady corporation, The Boys introduces a new approach to “supes” as you’ve never seen them before. This is superhero show for people tired of superheroes.

Phoebe Waller-Bridge’s incredible dramedy deftly mixes dark humour and gut-punching emotional moments, and makes clever use of breaking the fourth wall as Waller-Bridge’s Fleabag addresses the audience. In the tradition of great British comedy it had an all-too-brief run, but the bittersweet ending of season two was a satisfying conclusion.

Netflix’s incredible sci-fi series came back for its third season this year, with a fantastic continuation of an incredible story about parallel dimensions and teenagers with superpowers. This show has kept people talking for the last few years – and we can’t wait to see what happens next with Eleven, the gang, and the upside-down.

Based on the bestselling novel by Margaret Atwood, The Handmaid’s Tale is an incredible story about a woman who lives among thousands of “handmaids” that act as breeding stock to the ruling class in a futuristic society. The producers have done a fantastic job of bringing this unique dystopian tale to life.

Watch on: Channel 4 All4

A harrowing insight into the real-life disaster that shocked the world, Chernobyl is a programme that got everyone talking this year. The show provides an insight into the 1986 meltdown at a nuclear power plant in the Ukraine which terrified people all around the globe.

The TV adaptation of Taika Waititi’s (Thor Ragnarok) 2014 movie is the best new comedy show of 2019. This mockumentary follows a group of vampires sharing a house in New York, detailing their misadventures as they attempt to navigate modern life while dealing with such problems as cursed hats, planning a blood feast for an ancient vampire overlord, and being captured by animal control while in bat form.

How to Watch Streaming TV

So, how do you tune into streaming TV?

The options are endless. Anything with an internet connection today can download the right app and start streaming movies, shows, and other entertainment straight to your smartphone, television, or tablet. Just some of your options include:

There’s nothing worse than settling down to binge-watch a show on Netflix just to find out that your streaming service isn’t working. If something goes wrong with your system, and you can’t get past the buffering screen, the first thing to do is try turning your system on and off again. This will reset the streaming service and potentially repair your connection.

If that doesn’t work, find out what your internet speed is at currently. You might be struggling to access your streaming service because you’re distributing too much bandwidth elsewhere, such as downloads on your Xbox, or tabs open on your computer. Try turning other internet-connected devices off to improve your connection speeds. Other ways you can improve streaming include:

If nothing seems to be working, check that the problem isn’t with your streaming service – they could be having an outage, which means your only options are to switch to another provider, or wait for the problem to be resolved.

Property Industry Eye: Lettings firm throws down gauntlet to Countrywide – ‘We will buy your local brand’ 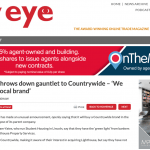 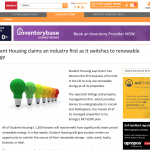