1. Posing for your student ID picture and realising you’re going to look like a prick for approximately three years.

Not even worth using for the student discount at the Engine Shed.

2. The pressure of being told to tell a class “a bit about yourself” in first year.

Suddenly, you become the most boring person on the planet.

3. Having to deal with your name being pronounced wrong by your new lecturers.

Too polite to correct them but too unsubtle not to pull a face.

4. Being shocked that people over 23 go to uni.

How do people have the time for children, essays, 3am library visits, superbull and lectures?

5. The moment you kissed someone on your course and made eye contact with them in the next lecture.

6. When someone aggressively tells you to shhh during a lecture.

I’m showing my friend a meme, have some respect.

7. Finally meeting the people from your seminar who you’re forced to work with.

Why is it that you always end up being put with the weirdest people that never even turned up to a seminar?

I love the support but it’s the lies I can’t handle.

9. That time when you thought your deadlines were done then one arose out of nowhere.

10. Trying to convince your flat mates to have a party.

11. After attending one of your first pre-drinks at one of the ‘party flats’.

Every Uni has a party flat. Usually its 212 in Junxion or stairs house!

12. And trying not to seem boring during ‘Never Have I Ever’.

A weird sense of pressure to have lived a hoe-life.

13. Trying to make small talk with new people and it going horribly wrong.

14. Hopelessly trying to flirt with the person you like.

The balance of interested but not too keen is a gift.

15. After catching up with friends from home who got influenced by an #edgy University.

Since when were scuffed white Reeboks your thing? I know the real you.

16. Realising that university is hard but real life is harder.

We can get theroux this.

Lettings in the Cloud… Developing our new Client Dashboard 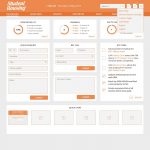